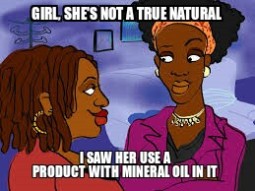 Hi. My name is Aphropuphs and I was a Natural Hair Nazi.

Natural Hair Nazi – One who is fabulously natural but at times their opinions can come across prejudice and discriminatory against those at a different point in their natural hair journey or those who are on a different hair journey altogether. Sometimes referred to as “natural hair bullying”.

I can admit it. I’m not ashamed, though, I sometimes sit back, laugh and cringe a little at some of the debates I engaged in on twitter and facebook. It still pains me to this day to think that my sometimes poorly executed good intent may have had an adverse effect on those that needed the most embracing. Everyone’s journey with their hair is a different one. Who was I to criticize someone on their own journey?

I have many other interests and passions, however, once I began my journey with natural hair it strengthened my spirituality and confidence. The shift in my life was undeniable. I saw everything differently and much more clearly. A lot of people in my life did not see it that way. They saw it as a phase or rebellion type of thing. It was viewed as anything but a positive transformation. I found myself defending my journey more than enjoying and understanding it. I went natural before it became commercial , so while some were informed there were many that were ignorant about it. This was back when you got a lot of stares and even comments (mostly rude) about your hair. I liked the controversy, it empowered me. It made me feel even more fierce. If they were going to stare, I was going to make it worth the look!

Anyway, along comes the natural hair explosion. Natural hair everywhere! All the natural hair, all the info, all the questions, all the journeys, all the affirmations, all the opinions, all of the similarities and differences, all the awakenings, bonds and sisterhood! It was such a beautiful thing and I was so happy. Everything was out there. It took over my life. It was causing unity, celebration of self, but sadly it also caused some separation and superiority/inferiority complexes. All of a sudden some people were not natural enough, while others were too natural. Some were defining strict guidelines of what being natural meant while others were seeking guidance and acceptance and even confirmation and reassurance of their naturalness. Then came the judgment, the criticism, the cliquing, the typing, the name-calling, the negativity. There were so many debates and discussions to be a part of and it was becoming overwhelming. It is easy to fall into the Hair Nazi category and you probably have at some point without even realizing it.

I was in denial for the longest. When I would hear the term “Natural Hair Nazi” it was such an abrasive label that I did not want associated with me. You start off simply sharing your natural hair journey with others, then that funky little opinion gets wedged in there and then you get on your soapbox and then POOF! Before you know it, you’re a Natural Hair Nazi or your are being judged by other nazis!!!

I had to take a step back and re-evaluate my personal journey and purpose with natural hair. Instead of growing and developing my journey, I found myself involuntarily withdrawing from what I loved to avoid the negativity. I was still involved with natural hair on a daily basis, but my online presence was almost completely nonexistent. Shame on me. I could dish it out but I could not take it. I never directly attacked anyone with my opinions but there are many things I put out there that one could take the wrong way. You live, you learn, and enjoy all of the experienced in between!! The good thing about this journey is that you are constantly improving yourself! I am here to share what I know and in turn hopefully it will improve a person’s relationship with their natural hair!! Thanks for reading!!

2 thoughts on “I Was a Natural Hair Nazi”

This site uses Akismet to reduce spam. Learn how your comment data is processed.